“An original and priceless contribution to history.”

—From the foreword by Marie-Claire Rolland 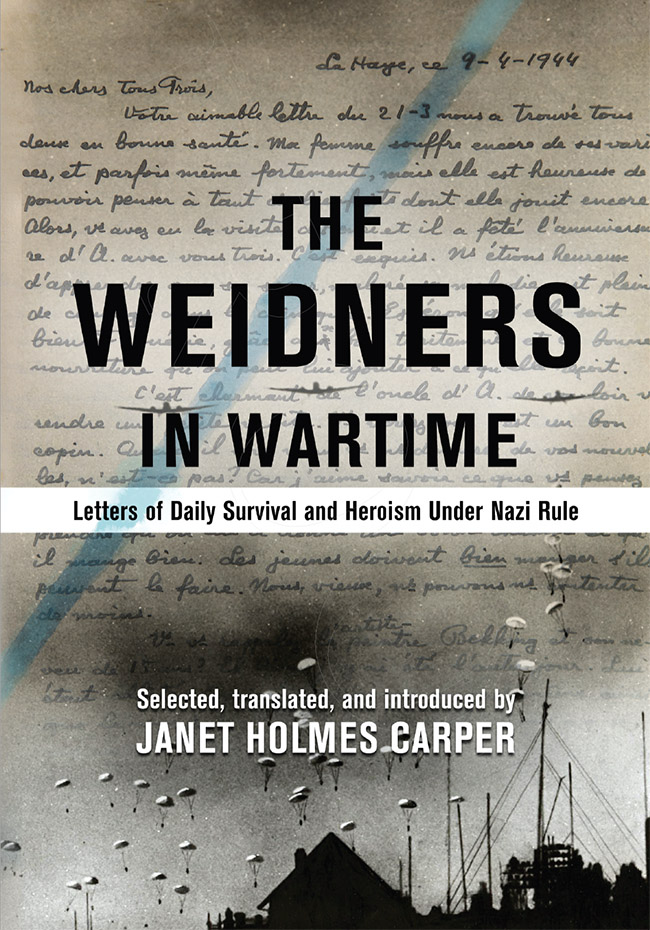 The Weidners in Wartime: Letters of Daily Survival and Heroism Under Nazi Rule

THE WEIDNERS IN WARTIME is the intimate story, told in their own words, of a family separated by war. Despite the dangers of writing under the inspection of censors, their letters paint a vivid portrait of decent human beings fighting valiantly to maintain their courage, their humor, and their faith during one of history’s darkest hours. It so happens that one member of the family is also a leader of the resistance, whose heroic actions to save fleeing refugees will make him a hunted man and one of the greatest rescuers of World War II.

In 1942, Jean Henri Weidner founded the “Dutch-Paris Line” to guide Jews, downed Allied pilots, and other persecuted people out of Nazi-occupied Europe to freedom in Switzerland and Spain. The Line spanned four countries and hid or escorted to safety an estimated 3,000 people, many faced with certain death. After the war, Jean was awarded the French Legion of Honor and the United States Medal of Freedom. He is honored as one of the Righteous Among the Nations at Israel’s Holocaust Memorial, Yad Vashem. Yet Jean’s actions to save the lives of strangers comes at a terrible cost to those he holds most dear.

Through these never-before-published documents—expertly selected, translated, and introduced by Janet Holmes Carper—readers will encounter the daily lives of an “ordinary” but remarkable family bound together by their deep love for each other and by their prolific correspondence across great distances. The frequently unvarnished words of the Weidners (including Jean; his spirited younger sisters, Gabrielle and Annette; his stalwart parents, “Papa” and “Mama” Weidner; and his fiancé and soon-to-be bride, Elisabeth Cartier) provide a unique window into historical events that continue to resonate in the present. Jean’s secret resistance work is barely alluded to in the family’s letters. What emerges instead are the distinctive personalities, voices, and moral characters of the Weidners as they face the harsh realities of the war with as much bravery and good cheer as they can muster.

The Weidners in Wartime builds to a devastating climax, raising profound questions about humanity and inhumanity, loyalty and betrayal, duty, and sacrifice, that do not admit easy answers and that linger after the book is set down. These letters, written more than 75 years ago, might inspire in new generations a commitment to selfless and courageous action in the spirit of Jean, Gabrielle, Annette, and the other members of the Dutch-Paris escape line.

Janet Holmes Carper is a teacher of French at all levels and to all ages. Her teaching career began as an English assistant in the Ecole Normale d’Institutrices in Châteauroux, France, for two years. In a rural Maine high school she was the entire French department. She has also been an editor of French and German textbooks at Holt, Rinehart and Winston. Though French is her second language it is on an equal footing with her first. Janet resides with her husband Tom in Cornish, Maine. Nearly every summer finds them in their 14th-century stone farmhouse in the Loire Valley in France.