“This book tells the story of Rudy Zeeman’s escape from Nazi officers in Paris, and his harrowing trek over the Pyrenees Mountains with downed Allied flyers, to achieve freedom in England. His research and recall of times, names and places, combined with his unvarnished prose, shines a light on the courage shown by Dutch and French resisters in World War II. Rudy does not promote himself as a hero, but he was brave—and he was lucky!”

—Coleman O’Flaherty, Member of the Order of Australia, Professor Emeritus, University of Tasmania 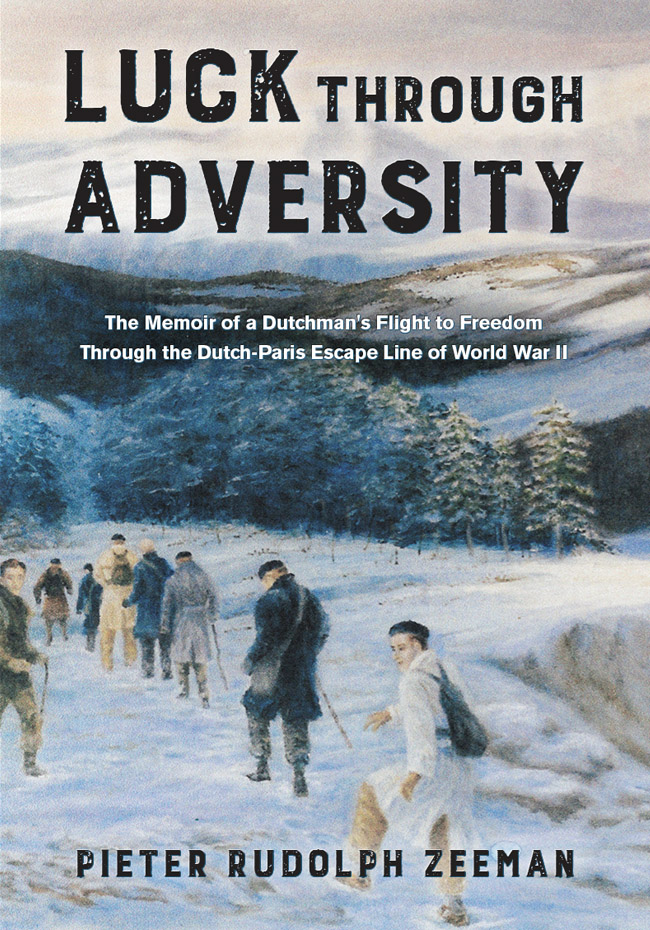 Luck Through Adversity: The Memoir of a Dutchman’s Flight to Freedom Through the Dutch-Paris Escape Line of World War II

LUCK THROUGH ADVERSITY is the memoir of a remarkable evader of the Nazis during the Second World War. Pieter “Rudy” Zeeman’s escape to freedom from Nazi-occupied Holland led him across four countries and thousands of miles by rail, car, foot, and sea. With the aid of the members of the Dutch-Paris Escape Line (founded and led by the intrepid John Weidner), as well as others, he reached safety after passing through a long and winding gauntlet of Nazi patrols and other dangers.

Luck Through Adversity is not only the story of Zeeman’s flight to freedom during World War II. It is also the story of his subsequent experiences in the former Dutch East Indies as a member of the Free Dutch Forces, of his courtship and marriage to Marie Bernadette Mortimer, of his post-war life, and of his immigration to Australia as his adopted home.

This book is a vital act of memory that will help to keep alive the story of the Dutch resisters and evaders of World War II, and their inspiring resilience, for future generations. It is filled with keen observations from a life well-lived.

Pieter Rudolph (Rudy) Zeeman was born in the Dutch East Indies in 1919 and spent his early childhood years there. After finishing high school in Amsterdam, The Netherlands, he entered tertiary education. In 1943, he escaped the Nazi occupation of Holland to England and joined the Free Dutch Forces. He then served in Australia and the former Dutch East Indies. After World War II, Rudy was awarded both the Kruis van Verdienste (Cross of Merit) and the Verzetsherdenkings (Resistance Cross) by the Queen of the Netherlands.

After returning to civil life, Rudy joined a large Dutch international import/export and shipping company in Rotterdam (Internationale Crediet en Handels Mij). He worked mainly in the Far East with this company, exporting such products as rubber, sugar, tea, coffee and essential oils, and rose to the position of Export Manager. In 1963, after a stint at the Company’s Head Office in Rotterdam, he decided it was time to return to a warmer climate and moved to Sydney, Australia where he represented a nylon extrusion business and then took up a management role in Real Estate. In 1986, he retired to Tasmania for family reasons. Aged 100 years at the time of publication of his Memoir, Rudy lives with Berna, his one and only wife for 74 years, in Launceston, Tasmania, Australia.