“It is a tribute to Herbert Ford that he was able to penetrate Mr. Weidner’s modesty and capture so well in the printed word the wartime story of this amazing human being.” 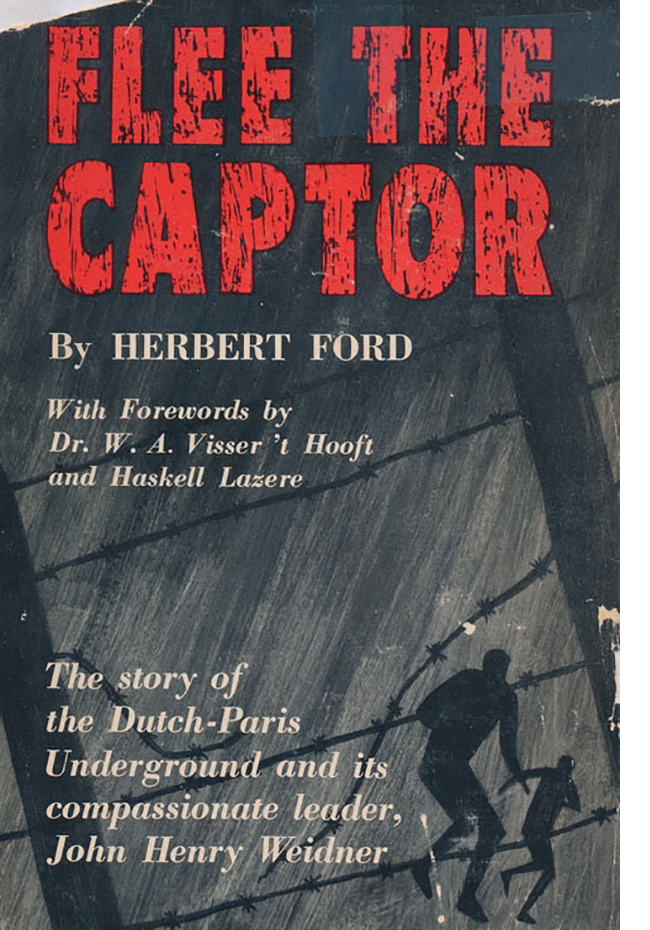 PUBLISHED IN 1966, Flee the Captor was the first book written about John Weidner. The author, Herbert Ford, based the book on extensive interviews with Weidner. Flee the Captor captured the imaginations of a generation of people and raised public awareness of Weidner’s story in the United States for the first time. Many details from the biography can be confirmed from the primary documents and testimonies of others during the 1940s that are contained in the Foundation’s Weidner Collection. While the style of the book is often closer to historical fiction than to rigorous historiography, it remains a valuable marker and starting point for exploring the history of the Dutch-Paris Escape Line in greater depth.

“I found that the story as told here brought that intensive experience of the war years right back. The author has of course used his privilege of writing a histoire romancier; that is, he reconstitutes events and conversations about which we have no detailed or verbatim records. But though I might here and there want to make a correction, I believe that the total picture he gives is basically truthful and reflects historical reality.”

—From the Foreword by Willem Visser ‘t Hooft

Herbert Ford is director of the Pitcairn Islands Study Center. He is an emeritus professor of Journalism of Pacific Union College, and the author of a dozen books. He is a veteran of service in the U.S. Merchant Marine, the United States Army Air Corps and the United States Air Force during World War II and the Korean War. Ford’s more than half-century-long study of Pitcairn Island in the South Pacific Ocean, home of descendants of the mutinous sailors on the British ship H.M.S. Bounty (in 1789), led him giving expert testimony about Pitcairn Island at three seminars on decolonization for the United Nations’ Committee of 24, at Majuro, Marshall islands; Nadi, Fiji; and Nomea, New Caledonia. An ordained clergyman of the Seventh-day Adventist faith, Ford served for many years in various posts for the Adventist denomination. He currently lives in retirement near Exeter in California’s Central Valley.